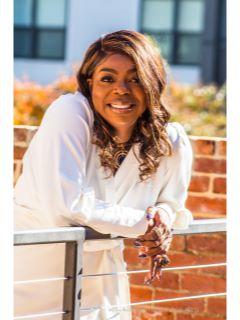 Terica Talbert, a native of Columbus, Ohio moved to the Greenville, South Carolina in 1985. Over the years, Terica has witnessed the expansion of the Upstate and desired to become a part of the area's growth. Terica's father, a former Korean veteran, joined the Century 21 team in Columbus, Ohio. Because of his excitement and consistent encouragement, Terica received her real estate license in 2001 and joined the Century 21 family. Terica began her quest to assist families in selling their homes, buying their dream homes and challenging others to invest in our community. In 2010, she received her broker's license and became the Broker-In-Charge of a small real estate company. After a short time, Terica missed the interaction of client relationships and returned to general brokerage with Century 21 Blackwell & Co. She chose work with Century 21 again, because of the unparalleled training, leadership support, worldwide name recognition and the comfort of being home. During Terica's early career in executive assistant positions, she developed a work ethic next to none, the ability to pay attention to detail and the consistency to follow-up, has allowed her a successful transition into the real estate market. Her calm demeanor affords her the ability to treat each client with compassion, patience and knowledge of the current market. With a great sense of humor, a soothing personality and a determination to get the deal done for each client, Terica is the REALTOR on the MOVE!
Read More Read Less